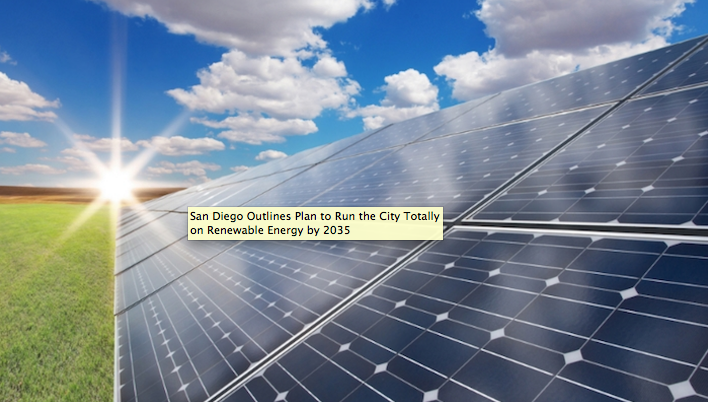 San Diego seems to be on the frontline of the battle against climate change, as the city has recently released a plan that includes running the municipality totally on renewable energy by 2035. The full future intentions for the city are outlined in a 74-page document entitled the Climate Action Plan.

The Climate Action Plan references “five bold strategies to reduce GHG emission,” which includes ideas for how cleaner energy can be implemented in buildings, plans for the production of clean energy, cleaner public transportation, plans for waste, and the topic of climate resiliency.

Of course, the city has stated that if these precautions aren’t taken, there could be some terrible prices to pay. The plan also details how things like wildfires and mosquito outbreaks are believed to be associated with climate change by many experts and scientists, and if steps aren’t taken to reduce the damage, things could get seriously ugly.

The plan also outlines that the the city hopes to reduce greenhouse gas emissions by 50% by 2035 as well, and talks of the intentions to create “green jobs” with the manufacturing and installation of solar panels.

San Diego isn’t alone in this mission, however, as cities like San Francisco, Sydney, and Vancouver have also made their intentions of going 100% renewable known. Many are hopeful that they’ll succeed, and San Diego’s detailed and flexible plan has a lot of people optimistic that they could actually pull it off. If that’s the case, then they could potentially serve as an example of how “going green” benefits the planet and can create more jobs. Then again, hopefully it won’t take until 2035 for the rest of the world to realize that.